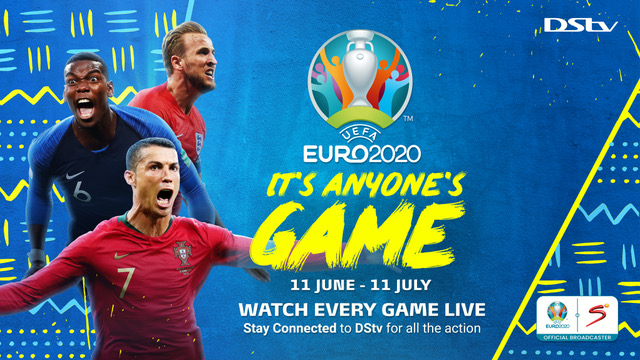 Johannesburg, June 2 – SuperSport has announced its expert line-up for coverage of UEFA Euro 2020.

The tournament was postponed last year and is now set to begin on June 11, with the final taking place on July 11.

Led by main presenters Julia Stuart, Neil Andrews and Carol Tshabalala, the studio guests will offer a wealth of insight and opinion on what is shaping to be a memorable tournament. There will be one-hour build-ups for all 51 matches, plus post-match wrap-ups.

Among the 24 teams are seven former champions, including Portugal, the defending holders, who begin their campaign on June 15 against Hungary.

Daily matches are ideally staggered (3pm, 6pm and 9pm kickoffs), ensuring sumptuous coverage for soccer fans. Part of the coverage includes an all-new show on YouTube (SuperTube) that is designed to offer a fun, engaging experience for fans.

SuperSport will have multiple language options in South Africa: English, Sesotho and IsiZulu.

Across the continent, there will be options of English, Portuguese, Swahili and Amharic languages.

The popular Master Plan magazine show (Sundays, 1pm) will also make a comeback with emphasis on strategic tactical analysis. This will be complimented by the use of  technology such as the telestrator, touch screen and augmented reality graphics; a winner for coaches and former players seeking to lend their perspective.

Highlights and CatchUp
Besides SuperSport broadcasting all 51 matches live, there will be full repeat broadcasts, plus nine- and 26-minute highlight packages that will be available on CatchUp and the DStv app.

SuperSport will also broadcast UEFA’s daily show on all platforms.

Digital
SuperSport’s digital offering will be extensive and will include fixtures, results, live scoring, logs and top scorers – across all platforms.

There will be news, match previews, highlights, team and player profiles, live coverage of every match on social, plus studio clips, analysis and magazine show content.

SuperSport will also host and produce an all-new show on YouTube – SuperTube – that will feature a mix of soccer personalities and experts. It will include a blend of previews, reviews, analysis and fun segments in keeping with the entertaining nature of the tournament.

Showmax
In addition to the SuperSport platform, Showmax Pro subscribers in Africa will be able to live stream all matches of the Euro 2020 on their streaming service. Launched last year, Showmax Pro bundles the existing Showmax entertainment offering with music channels, news and live sports streaming from SuperSport.