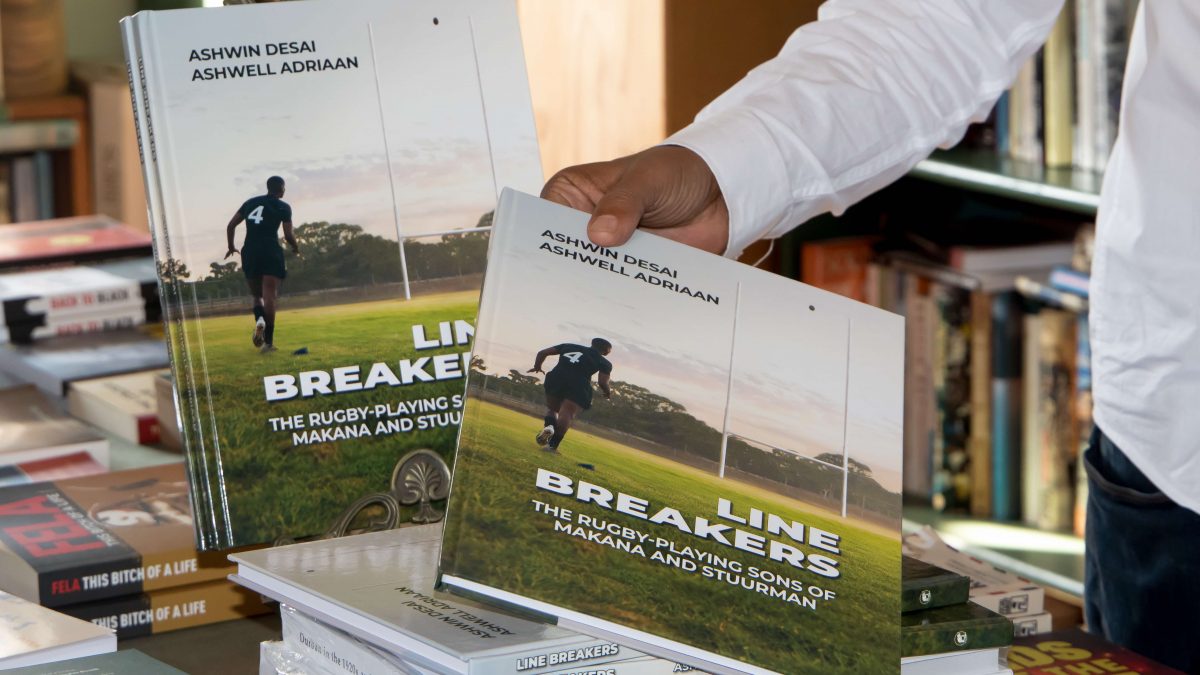 Shuter and Shooter publishers are proud to announce the launch of Line Breakers: The rugby-playing sons of Makana and Stuurman, based on a hitherto unwritten story of Black rugby  in South Africa. The book is authored by Ashwin Desai, a Professor of Sociology at the University of Johannesburg, and Ashwell Adriaan, a former rugby player and administrator.

In discussing the story behind the writing of Line Breakers the authors reveal that the process started as far back as 2006, when Ashwell Adriaan suggested to Ashwin Desai that they write a book on black rugby in Makhanda (Grahamstown). Desai admits he was immediately interested but was concerned that given the paucity of information the task would prove too daunting.   Over the next few months Adriaan showed him a scattering of photographs. One of the images that first fascinated him was a photograph taken of the first black rugby club, formed in 1887, called Winter Rose, taken at in 1900. When Desai saw this picture and photographs that somehow survived the decades of colonialism and apartheid he realised that it was criminal to even contemplate not taking up the challenge. And so began a fascinating journey of nearly fourteen years.

Both are keen to pay homage to the generosity of people like Phumzile Adam a Makhanda rugby legend and Marcus Solomon who was incarcerated on Robben Island for ten years (1964-74) both of whom were a source of constant inspiration through the writing of the book.

The authors admit that they struggled to find a way to stitch fragments into a narrative. A breakthrough moment came when Siya Kolisi, captain of the Springboks, brought the Webb Ellis Cup to Makhanda in early 2020. Kolisi is often seen as a product of the opportunities provided by the demise of apartheid and his own lucky break to go to a ‘White” school. But the authors through their research were intensely aware that Kolisis have been involved with the game from the early 1900s. So, for example, one of the founder members of Eastern, formed in 1905 was a Kolisi, in 1937 one of the key players for Eastern Province was a Kolisi, and in the 1970s in Makhanda, Vuyani Kolisi wore the Number 6 shirt for his club and Province. Through these “family” histories including the incredible story of Fana “Bush” Manana the authors were able to build a link through the twentieth century.

It is precisley this point of past and present made by Mr Sandile Zungu the chairperson of Shooter and Shuter and owner of Amazulu FC. As he writes in the Afterword  the book throws out ‘a challenge to “who owns history”‘ and the authors show ‘in the way they interweave past and present, capture the dreams of what the future would look like from those who played the game when apartheid tore human beings apart’…that ‘history is owned by all of us.’

In reflecting on their collaboration and the friendship that first began in 1980 and saw them both imprisoned in part for their work in building non-racial sport they write movingly: “This is how the two of us – the two Ashes – felt with the Grahamstown sun sinking low over Makana’s fields, as one more sepia photograph was handed over to us. We basked in the reflected glow of those who played the game at the highest levels, and marvelled at those players and supporters who dreamt that, one day, a bearded black man would arise out of the Eastern Cape and hold aloft the Webb Ellis Cup…This is a story of sacrifice and redemption’.

In remembering Stuurman and Makana both imprisoned on Robben Island the authors return them to the fields in they forged a unity in the context of struggle against colonial dispossession. As Mr Zungu poignantly writes; ‘The next time you land at the Dawid Stuurman Airport and drive to Makhanda, you can never say that you did not know.’

Coming at a time when the Lions are touring the country this story is an important antidote to the dominant narratives of rugby history in the country.

Line Breakers: The rugby-playing sons of Makana and Stuurman will be officially launched on 5 August 2021 and  is available from Takealot.com and participating book retailers

Ashwin Desai has written the following books on sport: Blacks in Whites: A Century of Black Cricket in KwaZulu-Natal (co-authored), Sport in Post Post-apartheid South Africa, Reverse Sweep: The Story of Cricket in Post-apartheid South Africa. His most recently published title, Wentworth: the Beautiful Game and the Making of Place, earned him the National Institute for the Social Sciences single authored book.

Ashwell Adriaan has served as curator of the Apartheid Museum, the Hector Pietersen Memorial, Cell Stories exhibition at Robben Island and Black rugby in Mkahanda. He is a leading collector of oral histories on early Black intellectuals and resistance theories. He has also contributed to  the game as an avid rugby player himself.

On behalf of Shuter and Shooter Publishers